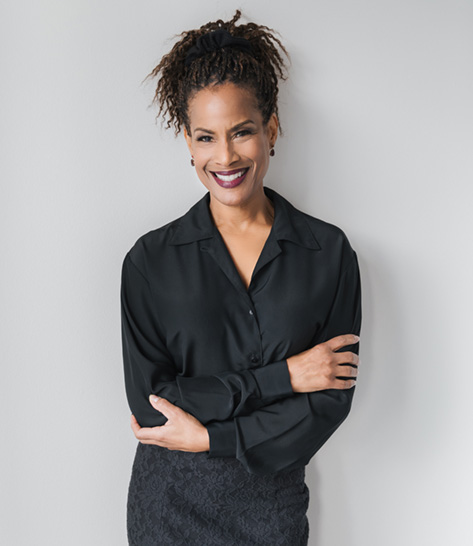 Janet Rucker-Smith was born the second of three daughters in Santa Monica, California and was raised in Los Angeles. Both her mother and father were among the first generation of African Americans to graduate from college – her father with a degree in engineering and her mother who received her master’s degree in public administration/education.

One week after graduating high school, Janet entered UCLA’s freshman summer program where she earned her bachelor’s degree in English. She quickly forged her path in the corporate world’s human resources field where her most celebrated success was creating and facilitating a career development workshop that guided employees through the process of self-exploration and self-assessment. She and her workshops were an instant success as her creative expression was flowing in phenomenal ways through writing and public speaking.

But this high-profile, high-energy career was not compatible with being the mother of three small children. And while at the same time becoming a single parent shouldering the majority of the child-rearing and financial responsibilities, Janet made a drastic decision to jump off the corporate fast track and change careers.

Coming from a family of educators, it was a natural progression to leave the corporate world and become a teacher. She earned her California Teaching Credential from California State University, Northridge and joined the faculty of a local high school as an English teacher, exploring literature and the writing process with incoming freshmen and outgoing seniors.

After 10 years of teaching in the nation’s second largest public-school system, Janet resigned her position and spent the following year cathartically chronicling an unexpected, often schizophrenic, inner pilgrimage through death, dark shadows, redemption, and rebirth. When she re-emerged, she had given birth to her first book entitled Rantings of a Screaming Soul.

Continuing to follow an inner call, Janet completed extensive training to become a certified professional life coach. Her passion: to help people like her – people who are ready for the inner and outer transformation from upheaval and fear to confidence and fulfillment.

Janet currently lives in Portland, Oregon with her family.